You are here: Studs | Broodmare Band 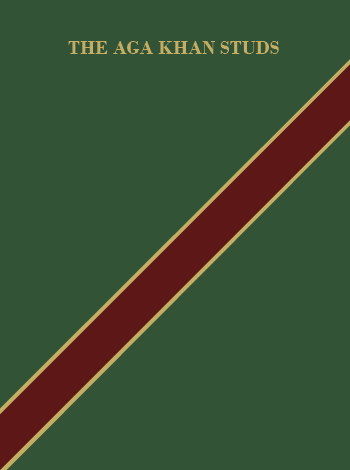 If you would like to receive an electronic version of the Aga Khan Stud Book, please fill in the form below.
The present Aga Khan has bred over a hundred Group I winners from a broodmare band that is famous for having been continually developed since his grandfather the late Aga Khan III was first introduced to racing in the 1920’s.

The most recent examples of this quality is the filly Zarkava, bred in Ireland and trained in France. The unbeaten heroine of the 2008 Prix de l’Arc de Triomphe descends from Mumtaz Mahal, a foundation mare purchased in 1922 by Aga Khan III. Zarkava embodies this continuous management of bloodlines at the highest level, within a traditional breeding activity. Furthermore, she has had a significant impact on her family by adding significant value to twenty mares within the operation.

When His Highness the Aga Khan took his first steps in breeding in the 1960s, he was guided by Germaine Vuillier and Robert Muller, two breeding specialists in France, as well as Major Hall in Ireland. With double estate duties to pay (his grand-father’s and his father’s), some difficult decisions had to be made, such as selling the highest value horses and keeping the young unproven stock. The result was a young broodmare band whose potential was unknown and whose racing performances had been modest. Thus the Aga Khan embarked upon his personal “game of chess with Nature”.

In 1977 and 1978 came the opportunity to purchase the breeding stock of François Dupré and Marcel Boussac. This represented more than 200 horses and broodmares at the time. Amongst them were recent or future winners of the Prix du Jockey Club Acamas and Top Ville. The impact of this purchase on the genetic pool of the broodmare band can be illustrated by Darshaan, a pure product of Aga Khan breeding, with a Boussac background. Winner of the French Derby in 1983 (beating Sadler’s Wells and Rainbow Quest), Darshaan was a superb stallion: his best product, the Champion Dalakhani, has now taken over from his sire as a home-bred stallion, and Darshaan’s mark as a broodmare sire is exceptional: his daughter have produced 33 Group I winners to date, and Darshaan was 2nd leading broodmare sire in Europe in 2011.

The genetic base of the Aga Khan Studs’ broodmare band was further enhanced in 2005 by the introduction of the North American bloodlines that Jean-Luc Lagardère had crossed so successfully with Linamix. These female lines were studied and matings analysed carefully to learn more about the Lagardère families, much in the same way as the Boussac and Dupré families had been built upon. The fruits were soon to be reaped, with the production of Group I winners Rosanara (Sinndar), Siyouni and Varenar.

The Aga Khan Studs stallions are well supported by this prestigious broodmare band, the success of whose bloodlines has never been more apparent, both on the racetrack and in the sales ring.

Tony Morris, speaking of the impact of the Aga Khan studs:

"I confess that I have not done the research necessary to prove it, but I would be prepared to bet a substantial sum that there was no notable Thoroughbred in the world today without some example of Aga Khan breeding in its background. In fact, I would go further, and challenge anyone with a surplus of free time – somebody embarking on a life sentence, perhaps – to show me the pedigree of any living Thoroughbred, good, bad or indifferent, anywhere on the planet that does not have any Aga Khan connection. The impact on the breed made by the third and fourth holders of that title, along with that of Prince Aly Khan in the intermediate generation, has been nothing short of phenomenal."

Today, the Irish and French broodmare band averages around 190 mares, a figure which is subtly managed to keep an equal number of mares from one year to the next, and thus culling with regularity.

When the fillies and mares enter the bloodstock market, they are often sought after by other breeders who appreciate that their families have been honed over generations. This seems to be confirmed by the European Bloodstock News:

"The Aga Khan is a very good man to buy from. He culls regularly … he is inevitably going to part with a mare that may come up trumps for another breeder, or one whose pedigree may suddenly read significantly better by reason of a major success in the family by a horse he has retained."

Many broodmares have gone on to produce well for their new owners, often at the highest level, as testified by the Group I winners Seal Of Approval in 2013, Igugu, Dar Re Mi and her brother Rewilding, Arcano or High Chaparral.

This website uses cookies
Cookies are small text files held on your computer.They allow us to give you the best browsing experience possible and mean we can understand how you use our site.
Some cookies have already been set. You can delete and block cookies but parts of our site won't work without them.
By using our website you accept our use of cookies.
No, I want to find out more Yes, I agree

N.18 c.by Dariyan ex Masaola, bred by Mr and Mrs Renk.
"He is a nice strong foal, he is well developed and we’re very happy with him."
Georges Rimaud

This website uses cookies
Cookies are small text files held on your computer.They allow us to give you the best browsing experience possible and mean we can understand how you use our site.
Some cookies have already been set. You can delete and block cookies but parts of our site won't work without them.
By using our website you accept our use of cookies.
No, I want to find out more Yes, I agree